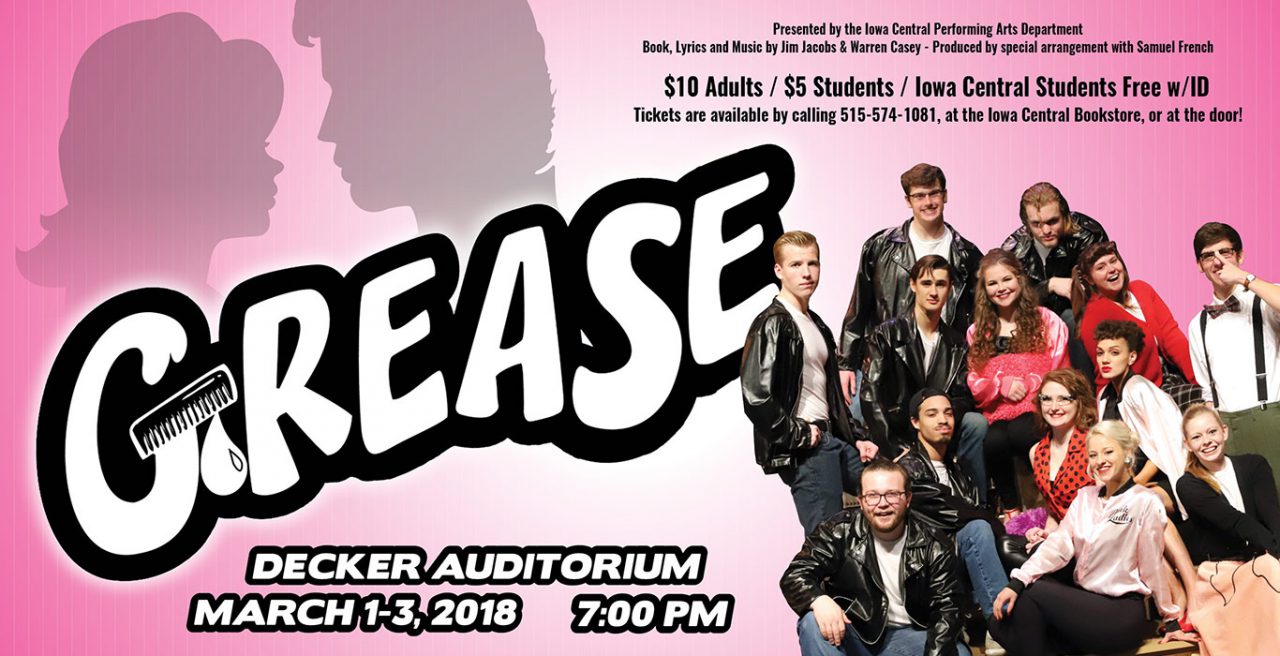 If you had been at Iowa Central for the fall semester, you may remember the performance of ICCC’s fall play, the Election, directed by Teresa Jackson. This spring, Teresa Jackson is bringing us another production, this time with the help of Lisa Dencklau and Kathleen Schreier. The production is a musical that almost everyone is familiar with. Grease, by Jim Jacobs and Warren Casey, will be performed three consecutive nights at Decker Auditorium, starting on Thursday, March 1st at 7:00 p.m. Tickets may be bought at the door for $10 each, but they are selling quickly, so it may be helpful to go through the ICCC bookstore to reserve or buy tickets in advance. Starring Jonathon Schaeffer as Danny Zuko and Anna Ingalls as Sandy Dumbrowski, the musical is a trip back to the 1950s that deals with the lives of two groups of friends at Rydell High, the Burger Palace Boys and the Pink Ladies. Featuring dancing, singing, theatre, and even live music provided by the ICCC instrumental music program, the show is a guaranteed good time.

Teresa explained what the audience can expect when coming to see Grease. “Here’s the thing about Grease- it is, quite simply, fun! The dancing is energizing; the tunes are infectious; the characters are iconic. Also, since the story line is familiar to so many people, it’s an easier story to tell. Our challenge, then, becomes putting a fresh look on a show that everyone knows, especially when the stage version differs in several instanced from the movie- and even from the Grease Live production which premiered on television a few years ago. That is the creative challenge, but we work really hard to put a professional polish on all that we do. The students love our high expectations of them- and they meet our standards year after year after year. This is the only show of the year that combines all facets of our Performing Arts- vocal music, instrumental music, dance, and theatre. We have a number of athletes who have joined the cast as well, so we have an amazing blend of the Iowa Central campus represented. I love watching friendships form- and many of them remain lifelong connections.”

The cast members auditioned before winter break and have been practicing since their return for the spring semester. Teresa Jackson said this about the cast, “Our challenge is also finding ways to showcase every student onstage somehow- and we’ve got over 60 of them, several of whom are experiencing live theatre performance for the first time. But- that’s always been our mission. We want to give as many students as we can the opportunity to experience the magic that is the Iowa Central stage. They are incredible young people- it is the greatest joy working with a group of committed, excited students, and the thrill never grows dim.”

Although Grease is a familiar story to many of us, this version is a fresh take on an instant classic that will keep any audience member entertained. From the costumes, to makeup, dances, songs, and props, everything has been put together to paint a beautiful portrait of teenagers in the 1950s with overarching themes of friendship, love, and identity. The musical will premiere in a matinee performance on February 28th at 9:00 a.m. and will then be available to the public the following Thursday through Saturday night; March 1st to the 3rd. Remember, Grease is the word!

previousTriton Pantry & Closet is Here for You!