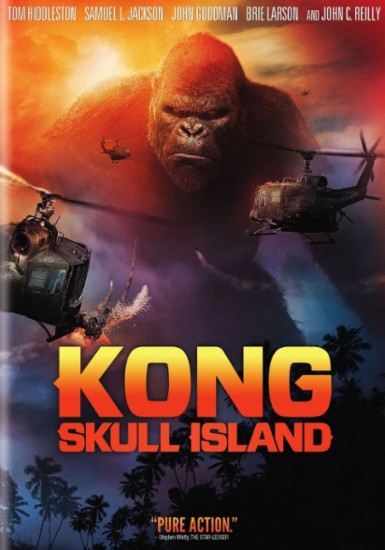 King Kong charges onto the screen for the first time in 12 years in the latest monster movie from Legendary Entertainment. The producers who brought you Godzilla (2014) and the studio that brought you Pacific Rim use their latest film to throw a twist on the classic western iconography of monster movies.

Set amidst the aftermath of the Vietnam War, the United States makes a discovery of a large island off of the coast of Indonesia. Strangely enough, the island seems to be covered in a massive electrical storm. Anyone who attempted to reach the island prior was lost, to never be seen again. Noticing a three day window in which the storm is lacking in intensity makes the island approachable. In haste, the U.S sends a team of soldiers led by Lieutenant Colonel Preston Packard (Samuel L. Jackson) to escort a team of researchers led by Bill Randa (John Goodman). They are joined by War photography journalist Mason Weaver (Brie Larson) and Survival Expert and former British SAS, Captain James Conrad (Tom Hiddleston).

Upon arriving on “Skull Island,” the team finds that this exploration will be far from routine, for while man may rule the known world, here on Skull Island nature still holds dominance, and the true King lies in waiting…

Kong Skull Island is the second film in Legendary Entertainment’s Monsterverse series, which will culminate in 2020 with the film Godzilla vs. King Kong. The first film in the series was Godzilla, and was released in 2014. Kong: Skull Island ultimately serves as a reboot for the giant ape, a reboot that attempts to stand on its own. I feel that this reboot finds its identity, distinguishing itself from the 1933 original, as well as numerous other reboots. Prior to this film, the most recent King Kong was Peter Jackson’s 2005 film, which followed the design of the original to the letter.

As Skull island is a monster movie, general audiences come from far and wide to see the monster, and where Kong is concerned, I believe that was handled quite well. Kong’s presence on screen is impressive, He tears across the screen as a destructive force of nature. At the same time, he also has quite a sense of primal magnificence and gentleness to him. Kong is brought forth in a sympathetic manner, but one whose fragility is maintained by the knowledge of what Kong is capable of.

The human cast of Kong is sizable enough, yet only a select few are truly memorable, and even those who get the most screen time aren’t developed that well. The characters are identifiable, but the focus is on Kong and the other denizens of Skull Island. As a fan of the giant monster movie genre, I can say I enjoyed this film. It sets itself in the same universe as the most recent Godzilla film in the Monsterverse, and quickly throws you into the action. Fans of the genre and common moviegoers alike can enjoy what this film has to offer. So, if you like, take a visit to the theater, and turn your brain off for an explosive adrenaline filled adventure that will glue you to your seat until the end of the credits.

nextTriton Pantry & Closet is Here for You!