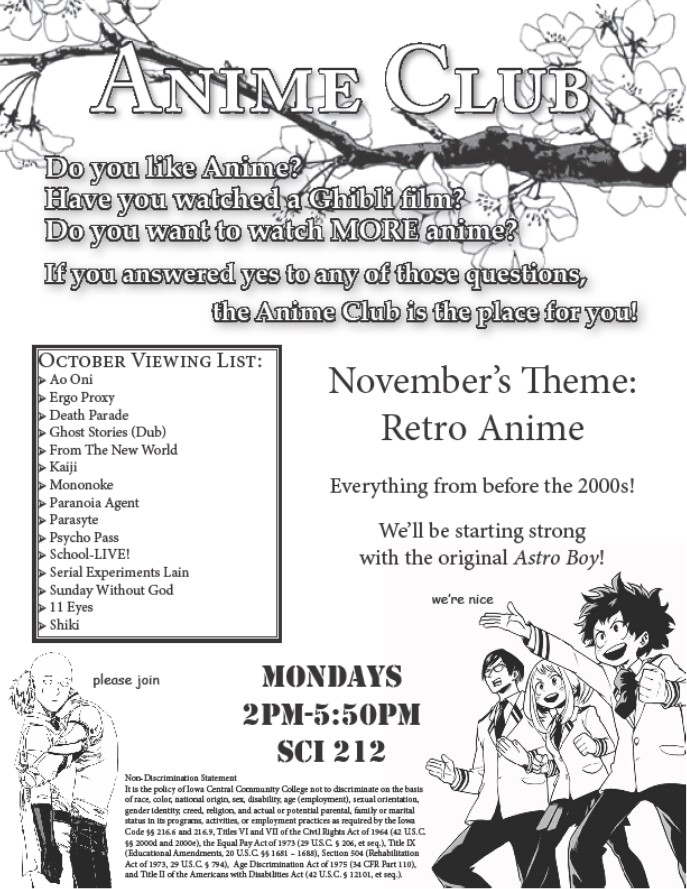 In the list of clubs Iowa Central has to offer, perhaps one of the most specific interest-based groups is the anime club. Anime is a style of Japanese film and television animation. The anime club, which meets every Monday from 3 p.m. to 6 p.m. in Room 212 of the science building, is a student-led club that’s been around for seven to eight years. Currently supervised by Professor Kara Weyand and run by freshmen student Kailyn Ekstrom and sophomore Ash Wille, the club gets together to view anime over the projector. Members are encouraged to come whenever they are available and are allowed to talk during the film if they wish. Anyone who would like to get involved with Anime club can arrive between 3 and 6 p.m. On any Monday at Room 212 in the science building, and be prepared to watch anime with the rest of the group.

When discussing the anime club, Ash Wille explained, “The anime club is a welcoming environment for people who like different types of animation of the Japanese aesthetic. It doesn’t necessarily have to be made in Japan, but it has that style. Just last week, we saw one of the very first Japanese animations ever.” Kailyn Ekstrom and I talked about why students might benefit from watching anime, to which Kailyn claimed, “It provides a lot of interesting stories that aren’t told in the Western world. The perspective is different and you can learn about a new culture. You learn about so many different experiences and thoughts.” An exciting possibility for the Anime club this spring is the chance to go to Anime Detour, an anime convention in Minneapolis starting in April of 2018. Ash shared that he was excited also for new members to join, stati 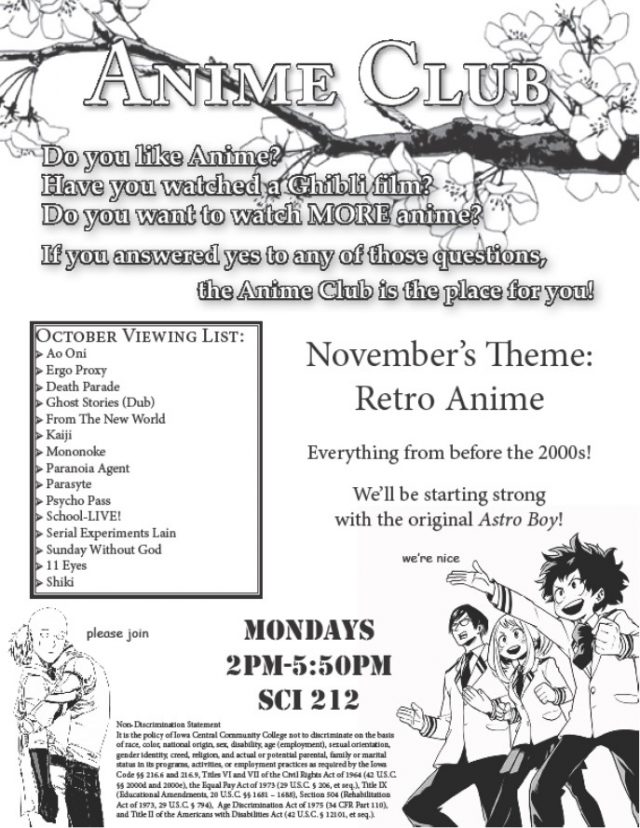 ng, “I’m hoping that more people would become interested in the club and a few more would come to our meetings and enjoy anime with us.”

I spoke with supervisor Kara Weyand, who is an art instructor here at Iowa Central. We spoke about the anime club’s origins. “We’ve had some members who have been students for three or four years. They’ve been sort of a backbone.” When discussing the changes the club has seen, Weyand explained, “The meetings are more regular now. There’s kind of a plan in place with the theme and anime picked out ahead of time. It’s more regular and more people are coming. Sometimes there are things that are not appropriate; we want to feel inclusive so no one is uncomfortable with what we’re watching. I try to be very aware of triggers and students give each other warnings. We try to be more sensitive to people who are joining the club.”

Finally, we talked about the Weyand’s hopes about the future of the anime club. “I hope we can have more interaction with students from all over campus. Students from a variety of programs; that’s more interesting to get a variety of viewpoints. Increasingly regular attendance, and even more conversations and a sort of analysis aspect to it.” The anime club is comprised of both its supervisor Kara Weyand and any students who would like to be a part of the experience, so if you are interested in joining the fun, keep your next Monday afternoon open to attend your first meeting.