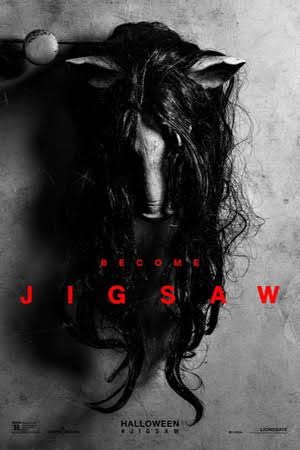 Although Halloween has come and gone, watching a new horror movie will give you a good thrill, no matter what time of year it is. Beginning in 2004 and continuing until 2010, a Saw movie was released each year. If you are a fan of the seven original Saw movies, then you have probably been anxiously awaiting the release of the eighth installment in the series. In 2013, after a three year break of releasing movies, fans were thrilled to hear reports that Lionsgate was working on another sequel. Jigsaw hit theaters on October 27th.

Jigsaw follows a storyline that stays true to the other Saw movies. This film features two lead roles: Matt Passmore as Logan Nelson, and Tobin Bell as John Kramer, better known as Jigsaw himself. The movie proves early on that Jigsaw is back up to his old tricks and is ready to play another game. The victims of Jigsaw’s physical and psychological torture games this time around are Anna, Carly, Ryan, and Mitch. Also important to the storyline are the acclaimed “good guys,” the detectives trying to put an end to Jigsaw’s games. These lead characters include Detective Halloran, Detective Hunt, and Eleanor.

The movie begins with our victims already inside of Jigsaw’s new game, being tortured and trying to escape. The storyline progresses with our victims surviving the horrors of one room, and moving on to the next. Each room contains a new torture device, ranging from deadly circular blades, baited traps, metal chains, lasers, and another large device that can only be described as a death machine. The only way to escape the game is for the victims to confess their sins out loud to Jigsaw, but this comes more as a challenge to the characters than it would to an audience member. As the victim’s lives are taken inside the game, Jigsaw proceeds to place their bodies around town for the detectives to discover.

The film was directed by Michael and Peter Spierig. The way they allowed the scenes to progress gives the audience moments to breathe in between all the blood and gore that this movie has to offer. The cinematic aspects of this movie are what keeps the audience on the edge of their seat. Three to five minutes will be spent viewing the horrific scenes inside the game, and then it will flip to the detectives perspective of how they are trying to solve the murders and find the location of Jigsaw’s game.

The film’s runtime is approximately an hour and a half. Since the movie is not particularly long, it means that it is relatively action packed throughout the entire movie. There is not really a moment where you get bored trying to figure out the twists that this movie contains, because there are many that keep you guessing. The main fault that I found with the movie was the dialogue between the victims of the game. They were all quick to turn on each other rather than form a team that would engage the audience to hope that they would all survive to the end of the movie. This movie also contained very graphic murders and torturous moments that makes the audience want to look away. If you are not okay with graphic content, then this movie is not for you.

As fans have a hard time accepting sequels because they feel the need to connect them with earlier films, it is important to let this film stand on its own. This movie featured a strong cast, and was well written to keep the audience engaged throughout the whole of the movie. Even if you are not a horror movie fan, there is still enough good storytelling here to make for an enjoyable trip to the cinema.