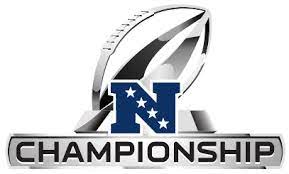 On Sunday, Jan. 30 both the AFC and NFC Championship games will be played.

In the AFC championship we have the away team The Cincinnati Bengals vs the Home Team Kansas City Chiefs. Last weekend both of these teams won very close games. The Bengals were victorious over the Tennessee Titans 19-16. Then The Chiefs won a nail biter versus the Buffalo Bills 42- 36 in overtime. This game will be played on CBS on Sunday 2:00 pm Central Time.

In the NFC championship we have a battle of two NFC West Teams. The Away Team is the San Francisco 49ers versus the Home Team Los Angeles Rams. The 49ers got here by knocking off the Green Bay Packers Last Week by the score of 13-10. The Rams beat Tom Brady and the Bucs by the score of 30-27. This game will be played on FOX on Sunday at 5:30PM Central Time.