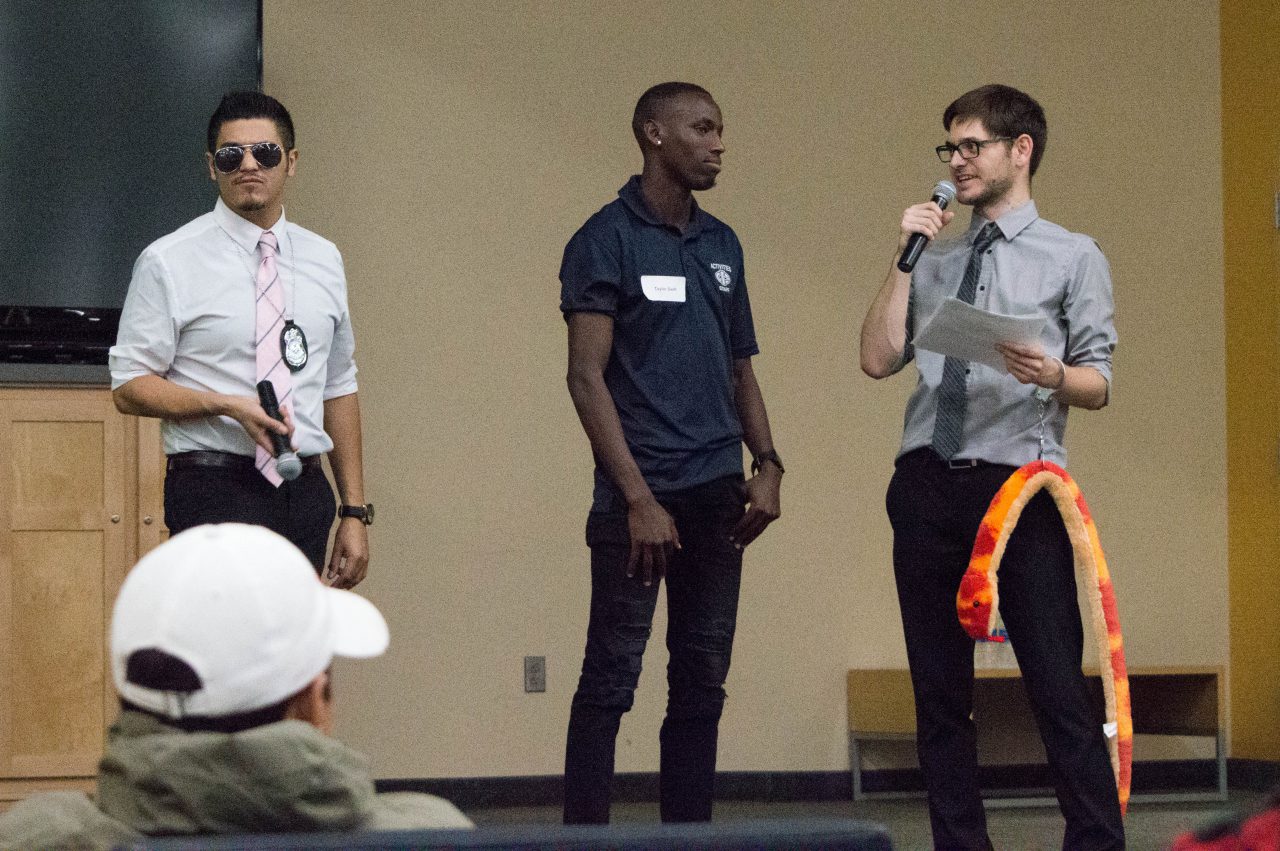 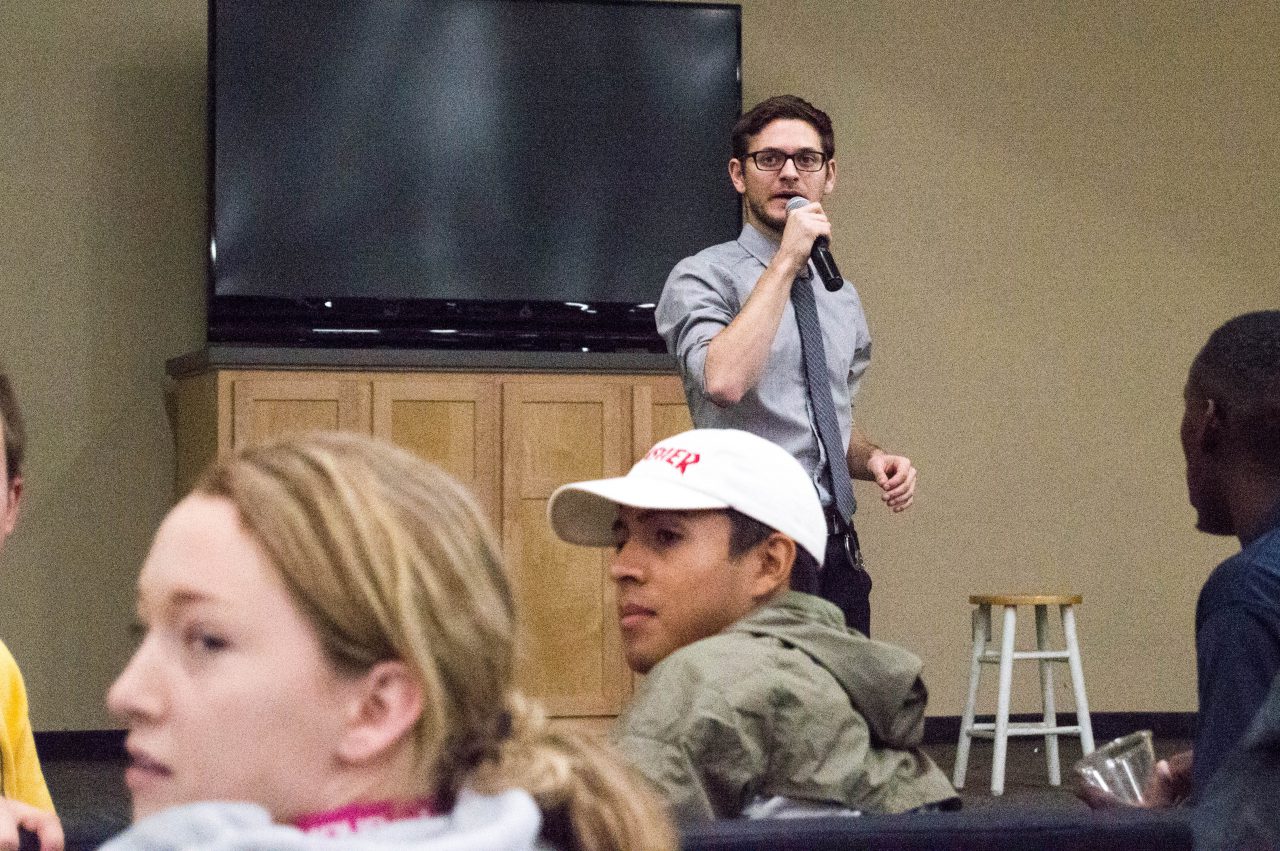 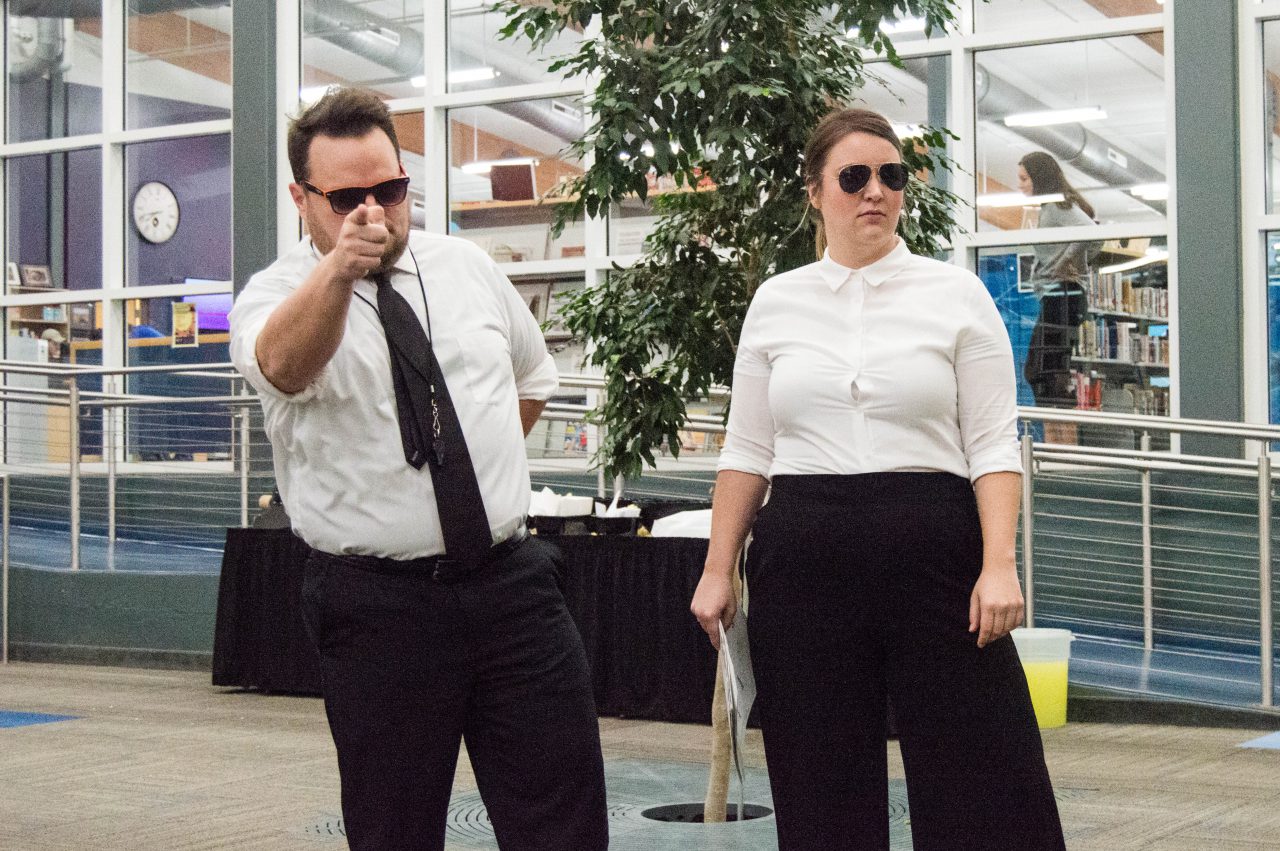 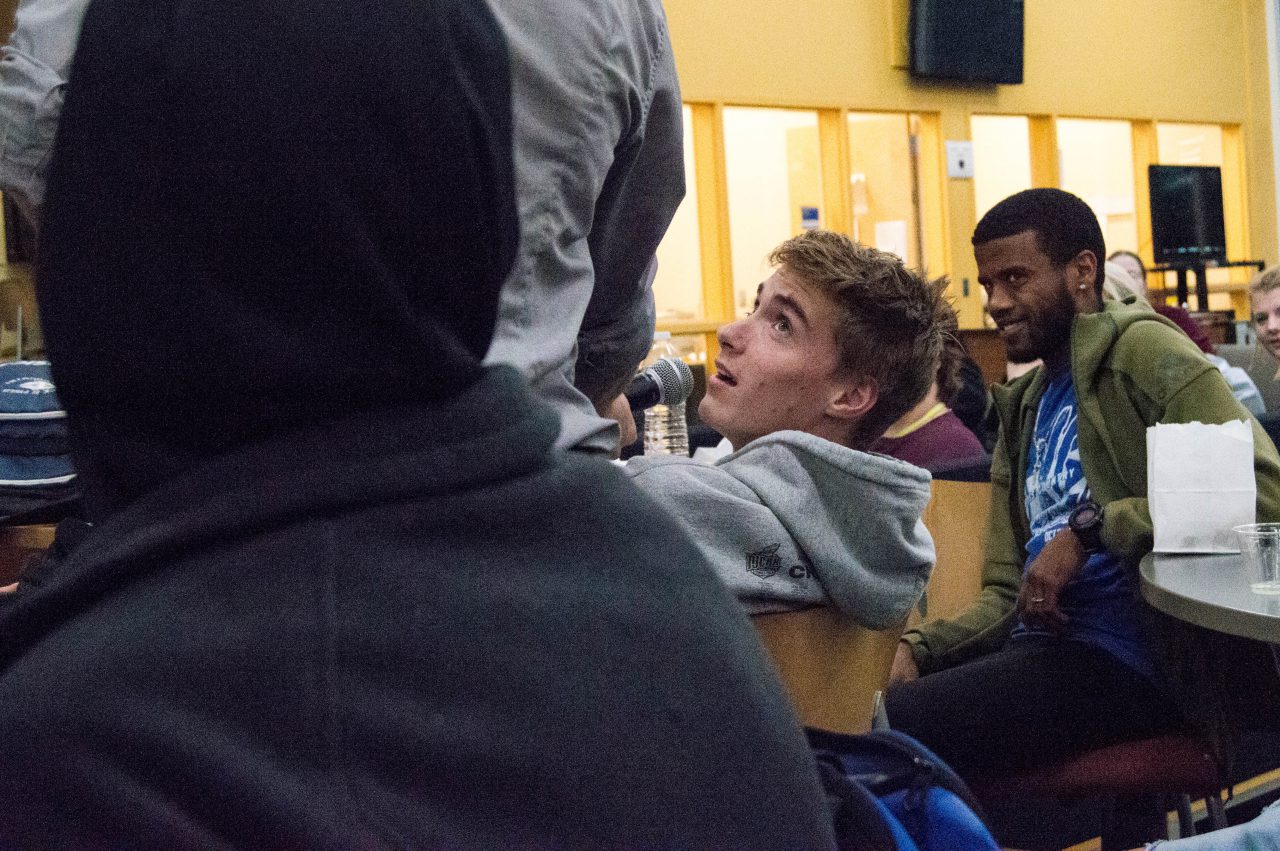 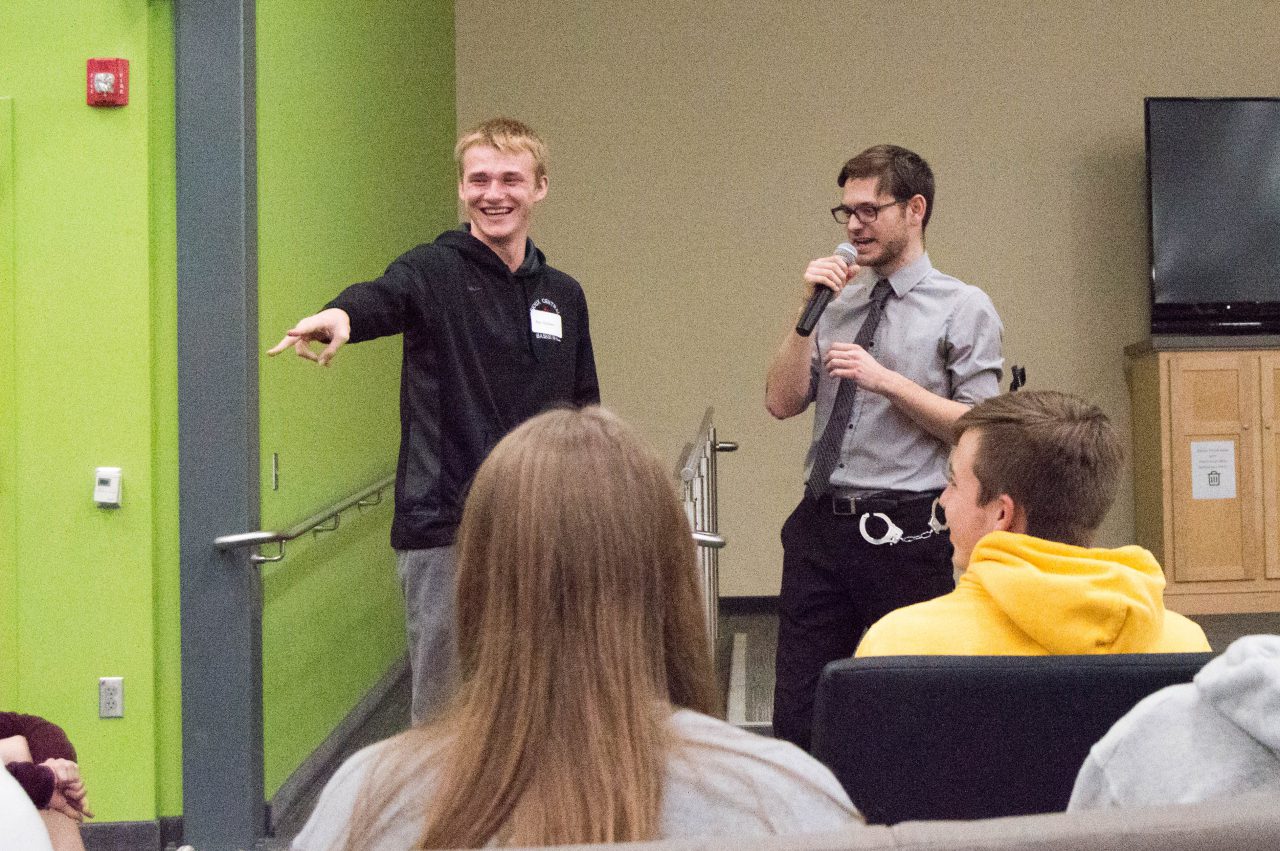 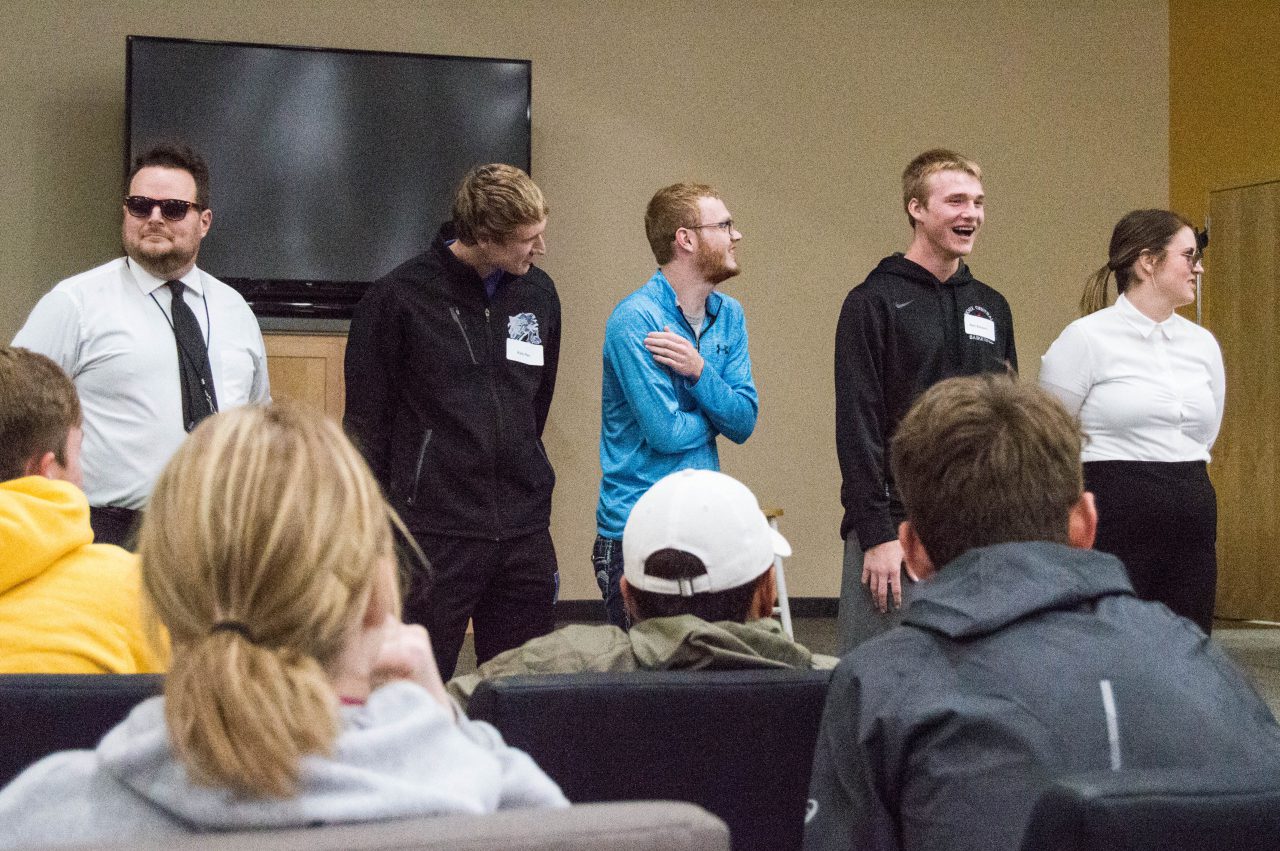 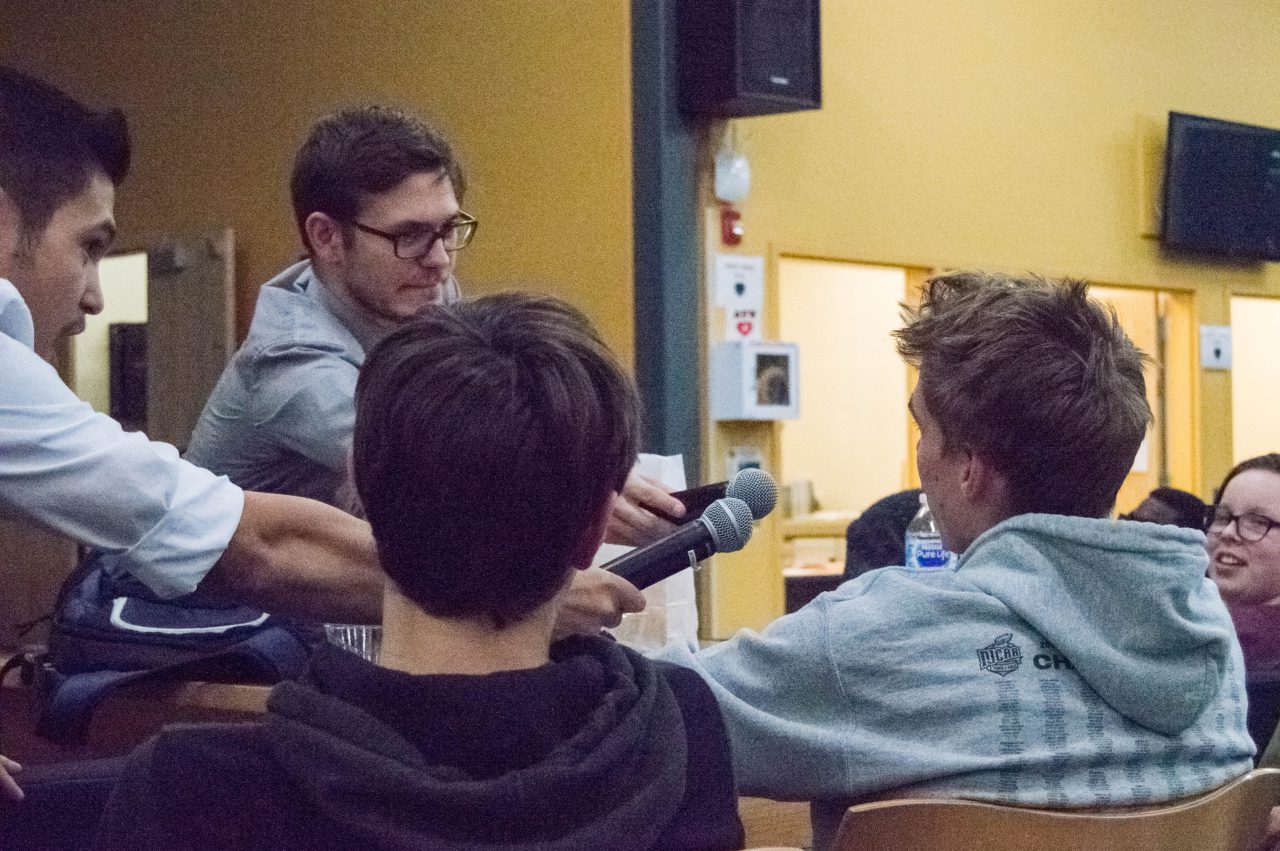 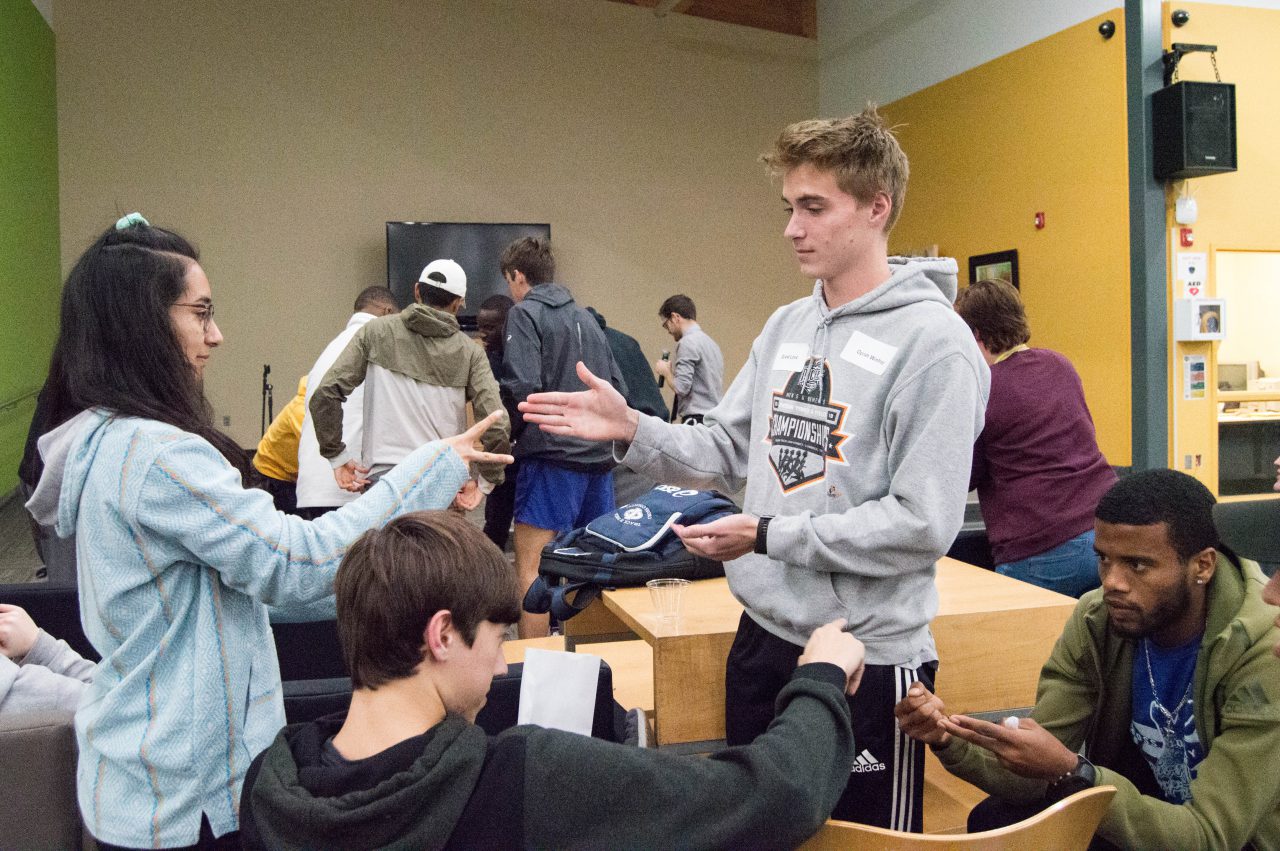 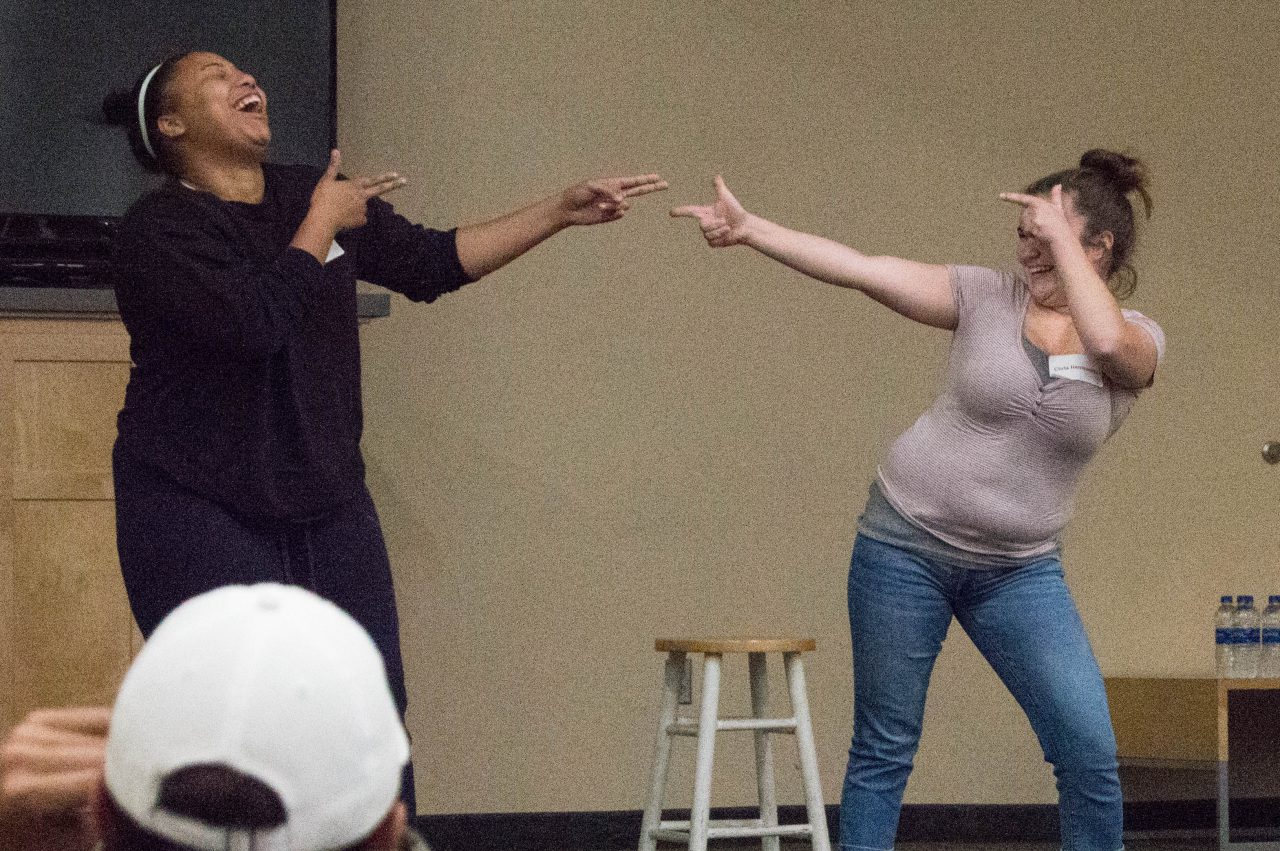 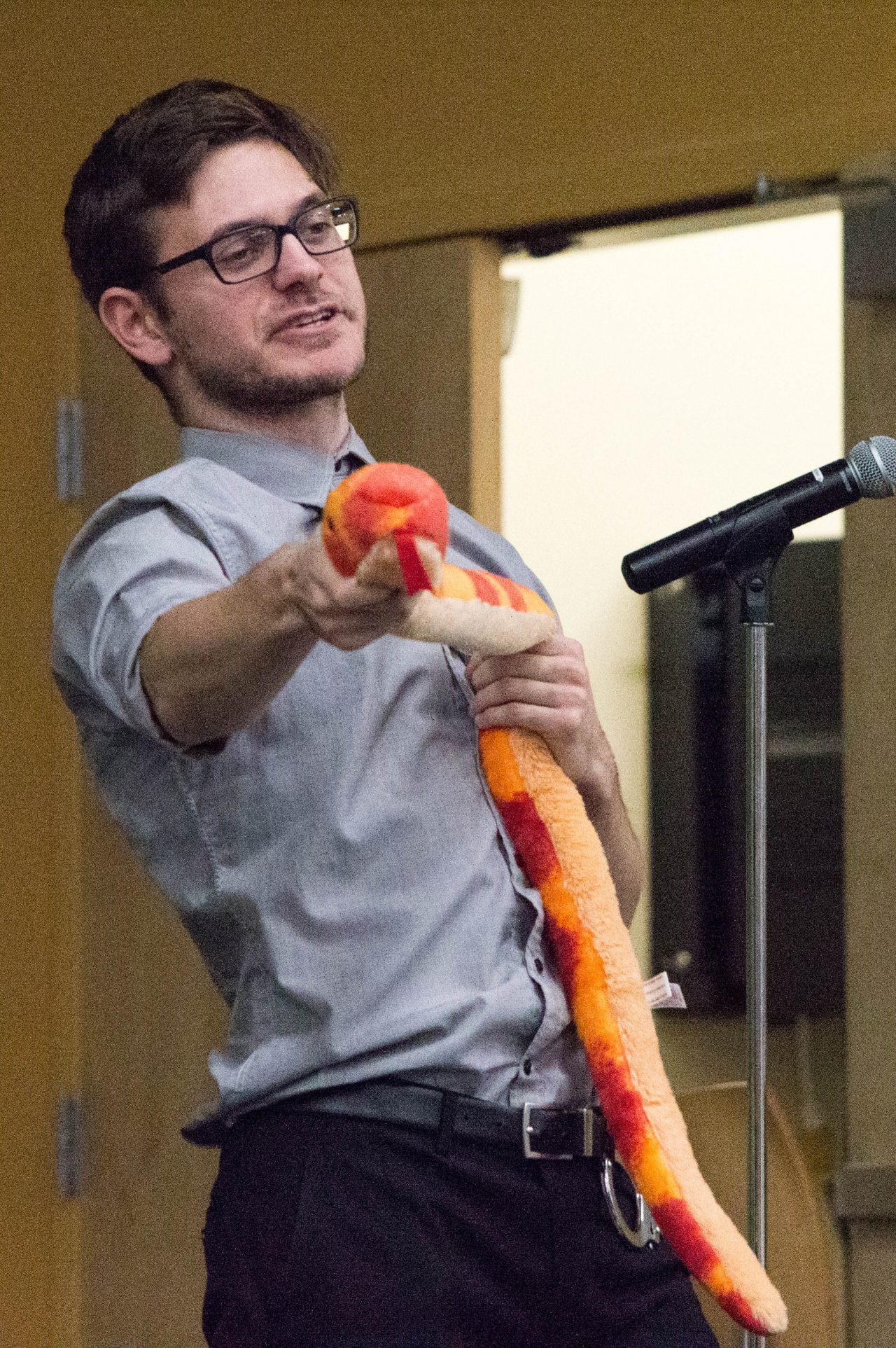 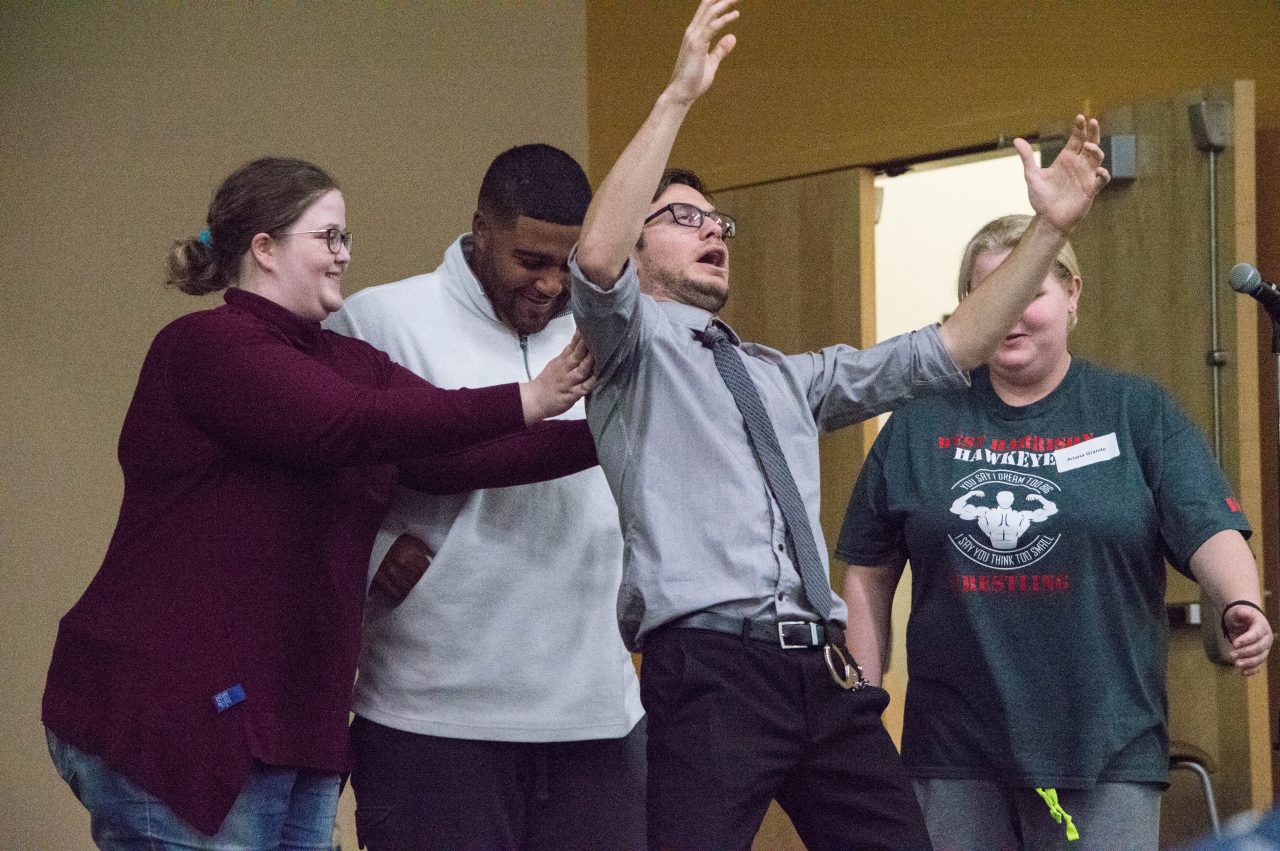 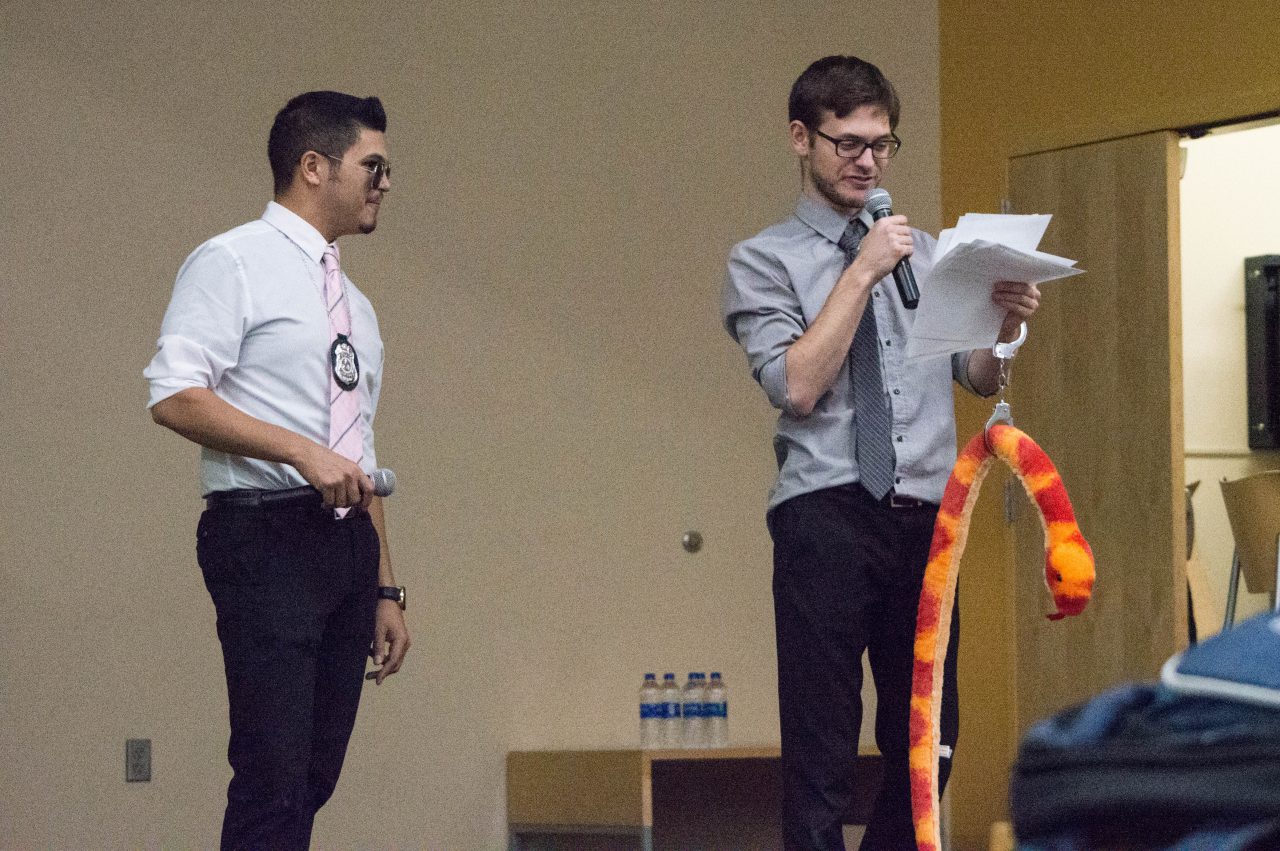 On Hallows’ Eve Iowa Central Community College welcomed an improv group, Mission IMPROVable, to the SRC stage (student resource center) to kick off an evening of mysterious events to go with the theme of it being spooky week.

Mission IMPROVable is a comedy team that features skills of fast-paced and exciting reactions to gain audience involvement. Every production they create is unique to the audience, as they take audience suggestions and interactions to twist the story as they going along. The improv actors of this team pretend to be agents, and the audiences job is to be their co-agents. Using on-the-spot randomness provided by suggestions from the audience often makes these productions hysterical.

Mission IMPROVable tours around the country performing improv of all styles for everyone. This group is well known for visiting college campuses across the country in particular. Together the group has also won a variety of awards. In 2012 they won an INNY Award for Best in Short Form. In 2013 the group won “Entertainers of the Year,” and in 2014 they won “Comedy Act of the Year” from Campus Activities Magazine.

The theme of their improv production was “Hollywood Murder Mystery.” Featuring Agent Suave (Rob Rico), his sidekick Agent Raptor (Thomas Zachary), and two more members that make up Johnson & Johnson (Kevin Shroyer) (Leeann St. John). The plot of the production was that newlyweds Justin Bieber and Hailey Baldwin were killed at their own wedding ceremony. Thus, members of the CIA were called in to interrupt the celebrity wedding and secure the perimeter so no one could leave. It was evident that someone in the room had to be the mysterious killer, and they would not leave until the culprit was found and brought to justice.

As members of the audience began to fill the SRC, they were each given celebrity name tags to wear for the night, as their would be their character in the improv storyline. Celebrities such as Oprah, Lady Gaga, The Shaq, and even Princess Jasmine were attendance of this holy matrimony. The two agent and Johnson & Johnson planted evidence around the room for the audience to interact with, and help solve the mysterious murder. Audience celebrities were interviewed, and suspect lists were created interactively by the team to progress a storyline where almost anything goes.

Everyone in the audience had a blast participating in this Halloween week themed activity. Lots of laughs were had by all, and memories were made together to last a lifetime. Thanks for visiting campus MissionIMPROVable! We hope to see you here again sometime soon!

Scroll through the gallery above to see pictures from when the improv group visited campus. All picture credits go to Karrina Laugen.

For more information about this group you can follow their social media.