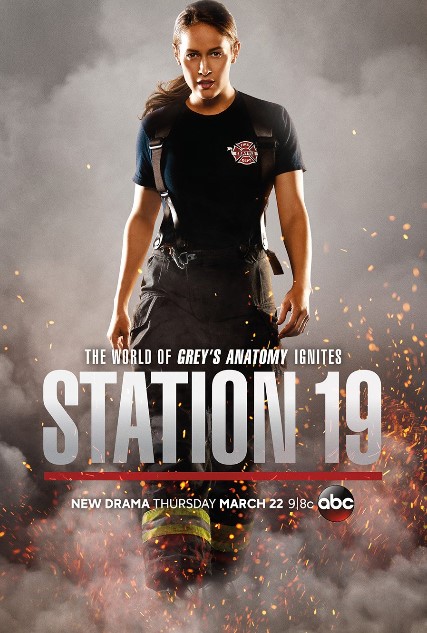 Shonda Rhimes has been known to lead Thursday nights on ABC for many years. Her TGIT (Thank God It’s Thursday) lineup follows her television show hits: Greys Anatomy, Scandal, and How to get away with Murder. After a few long months of waiting, Rhimes’ newest show Station 19 has finally joined Thursday nights at 8:00p.m. cst. A spinoff of Greys Anatomy, Station 19 continues the story of Ben Warren (Jason George), the husband of Grey’s Bailey, as he transitions from being a surgeon to firefighting.

Similar to Warren’s role in Greys, he will also not be the main character of Station 19. The lead role belongs to Andy Herrera (Jaina Lee Ortiz), and she holds many of the same characteristics that Rhimes often attributes to all of her main characters. Herrera has a female best friend on the show, Maya Bishop (Danielle Savre), whom she confides in with all of her relationship issues, and a father who just so happens to be the captain of the firehouse.

The two hour long premiere began by following the potentially deadly work of the firefighters taking on the show’s first emergency house fire. Working around the significant amount of protective gear they must wear to stay safe, it was a difficult balance of trying to identify characters, as well as unbelievable circumstances. The characters seemed to not be wearing a realistic amount of safety gear, as well as often removing pieces of gear at inappropriate times placing said characters in more imminent danger. I hope that as the show continues, and as the audience begins to recognize characters better, the show will become more realistic in this aspect.

The portions of the episode that seemed to be more enjoyable were the non-fire adventures. Firefighters are also responsible for responding to calls of people who have gotten themselves into sticky situations, and in this case it was a girl stuck between two buildings. The show did a great job of switching between intense fire scenes, and regular calls to help the storyline progress. Although, I think everyone enjoyed the excitement that came with watching the crew jump from a burning building in the first episode.

An important factor of the Shondaland network is to have a great cast that the audience can relate to. It was easy to tell that thought was put into the casting to make the characters diverse. The chemistry between all of the characters was lacking from the start, and it seemed as though the crew was broken off into pairs. I think that this was the easiest way to introduce the characters and their stories to the audience, and that we will see different interactions between the characters.

As for the love triangle that we were all expecting, this show did not disappoint. In typical Rhimes fashion, the main character is always struggling with her relationship, and it is usually between two very attractive men. In the case of Station 19, Andy Herrera is stuck trying to decide between two men, as well as focus on joining the higher ranks within her station. Love interest number one is a lieutenant of the station, Jack (Grey Damon). Her other love interest is a Seattle cop named Ryan (Alberto Frezza) who also happens to be her ex-boyfriend. So who is your immediate favorite, Jack or Ryan?

If you are looking for an extra dose of Greys Anatomy in your week, you have come to the right place. The premiere featured a few scenes at Grey Sloan Memorial Hospital that include many characters from the show. The main crossover is from Rookie Ben Warren, who is trying to find his place at the fire station. At times throughout the episode it was annoying that the audience was continuously reminded how he left his career of being a surgeon behind to pursue this action packed job. Hopefully he will find his place with the team soon, and that his coworkers will actually show interest at wanting to show him the ropes. The grade school hazing scenes were pretty unnecessary.

Station 19 & Grey’s Anatomy are property of Shonda Rhimes and ABC.